Information obtained through the Texas Public Information Act shows Williamson County has received invoices totaling $58,691.40 for legal expenses to defend the Commissioners Court's interview behavior.  The case is not settled and more expenses are expected.

The Austin American Statesman article reported the legal matter on May 21, 2013.  Robert Lloyd asserted he was asked questions that violated his constitutional rights, including his religious belief rights, during an interview for the Wilco Precinct 3 Constable position. http://www.statesman.com/news/news/local-govt-politics/lawsuit-pending-over-williamson-county-constable-i/nXyj7/ 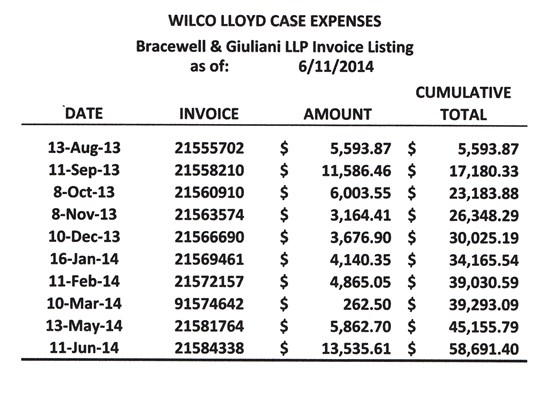 Mr. Lloyd was joined by two other individuals who reported the same behavior after they were interviewed, by the commissioners, for the same job.

Tom Mowdy, candidate for Williamson County Commissioner - Precinct 4, condemned the reported behavior as incompetent and prejudicial, and predicted it would add unnecessary costs to Wilco taxpayers. Williamson County already has one of the highest per capita debt loads in Texas.