The  Texas Civil Rights Project (TCRP) produced damaging Lloyd case evidence at their October 28, 2014, press release.  It was an undeniable video deposition and written notes evidence against the Williamson County Commissioners Court, handed to the press. 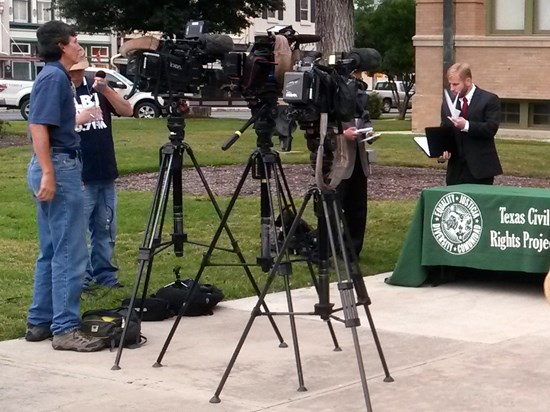 Wayne Krause Yang, TCRP lawyer for plaintiff Robert Lloyd, explained the evidence being made public was produced only in response to a Motion for Summary Judgment filed by the Williamson County Commissioners Court.

A Summary Judgment is a request for the justice court to dismiss the legal complaints on the grounds that those who complained have presented no evidence of a violation.

The evidence made public at the court house, and presented to the justice court, was a video recorded deposition of a Williamson County Commissioner, Cynthia Long, admitting that she did ask religious and political belief questions to government job candidates during the interviews. TCRP contends such questions are violations of U.S. and Texas Constitutions.

The Wilco Commissioners Court is spending taxpayer money defending their actions during the interviews by claiming the interview was for a job that is normally a position that all citizens would be able to elect and religion is subject to political conversation.  That explanation seems to fall short of reason because privacy laws prevent the Commissioners from announcing a person's religion to the public.

One can imagine the Commissioners announcing they selected the best qualified candidate based on job qualification skills.  But, can anyone imagine the Commissioners announcing the selection based on a candidate's religious beliefs?  They asked the questions, received the answers, made their choice, gave the job to the preferred candidate, and said nothing about the religious beliefs answers given by any candidate.

Mr. Yang presented additional deposition evidence from a witness who was asked religious preference questions during an interview for a job that was not an elected position.   And, another witness who was not hired because she did not properly answer a job interview question which asked who her favorite president was during her lifetime, and why.  Mr. Wang expects more individuals with more evidence will be produced. 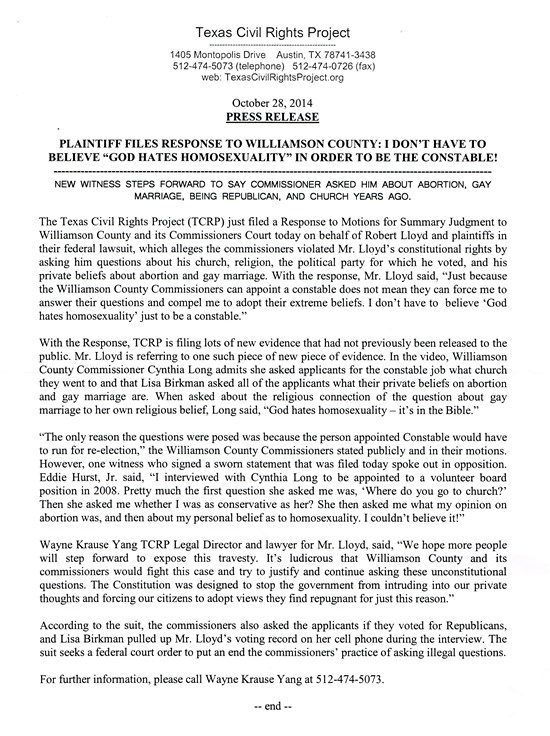 The behavior of the sitting Williamson County Commissioners Court dishonors the principles of our nation and all those who have given their lives to defend freedom since the creation of this nation.  Why do they pledge allegiance to our flag when the court opens?

These Commissioners would not stand and support the truth for Michael Morton, but, they will spend our tax money to deny the truth.  What else will they do?

This Williamson County Commissioners Court behavior is in violation of our Constitutions and is purposely designed to divide our common interests.  It is the ugly face of discrimination and the creation of hate that turns citizen against citizen while contractors are overpaid and our taxes are raised.