The Fraudulent and True and Correct Contract Side by Side

This photo release shows the true and correct August 18, 2009 Contract next to the fraudulent contract.

The top, two page document was concealed and not filed by the contractor in the lawsuit.  That contract became missing from Mowdy's residence where the contractor had access as the maintenance provider.

The contractor filed the fraudulent bottom document which was unsigned and contained over $113K in accounting errors duplicate charges, and charges for work not performed.  In violation of the law, which no official had the authority to change, the contractor and his lawyer were supported by the Williamson County District Attorney, Jana Duty, the District Clerk Lisa David, and the County Clerk Nancy Rister.

Fortunately, Mowdy found a copy of the top, true and correct, contract document and presented it after the fraudulent contract was filed in court. 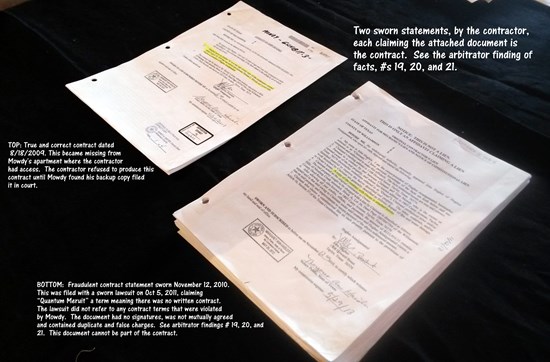 Both documents were sworn by the contractor to be the contract for the work.  Texas law states conflicting sworn statements is perjury.  The arbitrator determined the document was not what the statement claimed.

Left:  Top (document) True and correct contract dated 8/18/2009.  This became missing from Mowdy's apartment where the contractor had access.  The contractor refused to produce this contract until Mowdy found his backup copy and filed it in court.

Bottom:  Fradulent contract statement sworn November 12, 2010.  This was filed with a sworn lawsuit on Oct 5, 2011, claiming "Quantum Meruit" a term meaning there was no written contract.  The lawsuit did not refer to any contract terms that were violated by Mowdy. The document had no signatures, was not mutually agreed and contained duplicate and false charges.  See Arbitrator findings # 19, 20, and 21.  This document cannot be part of the contract.