(links to prior chapters are at the end of this chapter)

In the "Family Court Racket," the principals organize into special qualified skills that handle the separate parts of the legal and support system.  They have professional titles, including Doctor, Judge, County Attorney, District Attorney, Psychologist, and Counselor.

They are professionals with established relationships in the courts, police, and support agencies.  They know their system and how it can be churned to their benefit and profit.  The racketeers view Constitutional rights, the law, and morality as administrative nuisance and sentimental obstacles on their path to profit.  Their behavior is not in the best interest of the children or families. 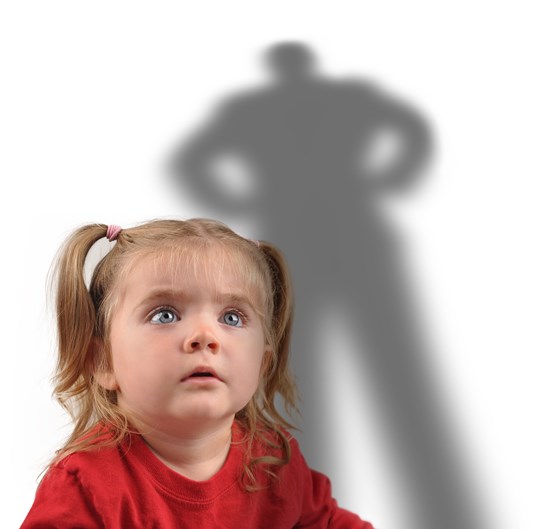 The racket is an $80 billion nationwide industry.  More money exchanges hands through the U.S. family courts than through any other civil court process.  The family court industry, the judges, lawyers, Ad litems, psychologists, and court ordered service providers are very aware of each family's vulnerabilities and financial potential.

Lawyers work for money.  The worst thing that could happen to the father's divorce lawyer is for the child's sexual abuse reports to be validated.  It would mean serious criminal charges based on substantial evidence.  If such charges were filed, the evidence and prosecution history indicates the divorce lawyer would lose an employed and paying client to the criminal system.

For the father's divorce lawyer, the best financial outcome would be to avoid the child abuse claims and then cultivate a long term income from the father's troubles.  It is unlikely the father would have objection since he would be avoiding possible serious criminal prosecution.

The profitable path for the father's lawyer begins with the "Ad litem."  When child abuse and custody issues enter a divorce, the court can appoint a third party individual to represent the "best interest of the child."  That person is called an Ad litem.

The Ad litem, is presumed to act in the best interest of the child and will have a controlling influence with the court, police investigations, and Child Protective Services (CPS).  A friendly Ad litem, can be very valuable to a divorce lawyer.

To begin cultivating profit, the father's divorce lawyer needs a cooperating and influential Ad litem appointed to represent the child.  A cooperating Ad litem can best serve the father's lawyer by attacking and destroying the child's sexual abuse outcries and evidence.  This strategy is not new.  It is a standard racket practice when defending against parental child sexual abuse. 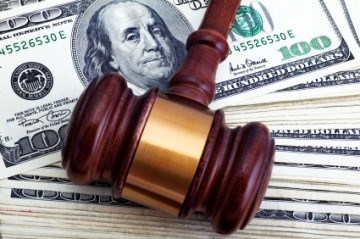 Travis County uses volunteer Ad Litems and some that are paid by a non-profit fund.  The Travis County system is organized to avoid the family court racketeering problem.  In contrast, the Williamson County culture has suppressed those resources and uses many Ad litems who are paid by the opposing parents. (Note: A future chapter will be devoted to the suppressed Wilco volunteer Ad litem resources which forces the use of parent paid Ad litems.)

In Wilco, the Ad litem's substantial fees are paid by the mother and father as long as the Ad litem holds the court appointment.  The Ad litem can also direct parents to spend money on psychological testing, mediation, supervised visits, and any other family service.  Some paid Ad litems have a conflicting business interest in the support services.  The Ad litem appointment can last until the child becomes an adult.

The Williamson County courts will force payments to the Ad litem, to include court orders requiring parents to sell their homes to cover the cost.  As a result, a court appointed parent paid Ad litem usually has a substantial and reliable income. 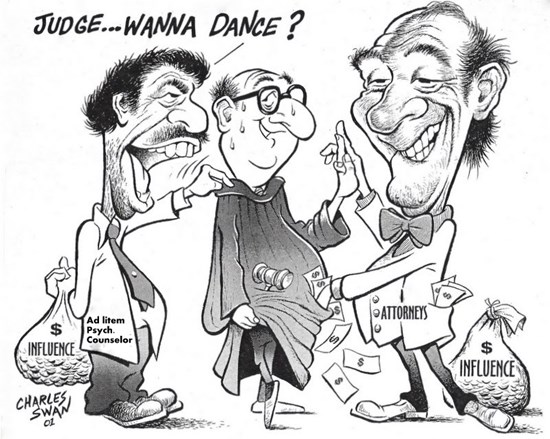 District judges in Texas are elected.  The court's power to appoint an Ad litem gives elected judges an opportunity to attract, serve, and affect the cash flow of their political supporters. Williamson County's 425th District court appointed a well known paid Ad litem for the child.  One who has multiple negative Ad litem service "customer" reviews.  Upon appointment, that Ad litem immediately sent an advanced payment invoice to both the mother and father.

The appointed Ad litem had an obvious conflict of interest in representing the child.  Like the lawyer, the Ad litem had a cash flow motive to ignore, destroy, discredit, and prevent any child sexual abuse evidence.

If the evidence resulted in criminal charges, the father would be prosecuted.  If the father was successfully prosecuted, the child would not need a paid Ad litem.  The child would only need her protective mother and the Ad litem would have no work to perform and no invoices to send.

The team was assembled, judge, lawyer, and Ad litem.  The mother was attacked.  The Ad litem and father accused the mother of making false sexual abuse claims and coaching her daughter.

The accusation came even though the records show the child made the initial outcry to a physician and nurse at the end of a vaginal irritation examination.  The specific communication, documented in the required report, was that the child did not want to go to her father because she said he hurt her vagina.  The mother was asked to leave the examination room and the child was questioned by the medical staff.

Texas family law is clear about responsibility for protecting children from sexual abuse. The physician had cause for suspicion and was required by Texas law to report the incident.

Sec. 261.101.  PERSONS REQUIRED TO REPORT;  TIME TO REPORT.  (a)  A person having cause to believe that a child's physical or mental health or welfare has been adversely affected by abuse or neglect by any person shall immediately make a report as provided by this subchapter.

The mother had no motive except her child's safety.  There were no divorce issues pending.  She already had primary residence and was receiving child support.  If the father was convicted of child sexual abuse, the mother would lose over $900 per month in child support income.

A qualified physician made the initial report based on his examination and communication with the child.  The outcry was confirmed by a CPS social worker who interviewed the child.  The mother had nothing to gain and too much to lose by creating false claims.

There were two allegations investigated.  First, the physician's, CPS social worker's, and mother's reports that the child made sexual abuse outcries against the father.  Second, a counter claim from the Ad litem and father, they claimed the mother emotionally abused her daughter by coaching the three year old child's complaints.

The next chapter will examine the investigation report, the evidence, conclusions, and the abnormal investigative technique.  In violation of established child sexual abuse investigation protocol, the process deliberately avoided a licensed therapist's video recording of the child's sexual abuse outcry.

Chapter 1:  Is Wilco too corrupt to protect children from sexual abuse?

Chapter 3:  The Wilco mother's concerns, the signs and symptoms of child sexual abuse.