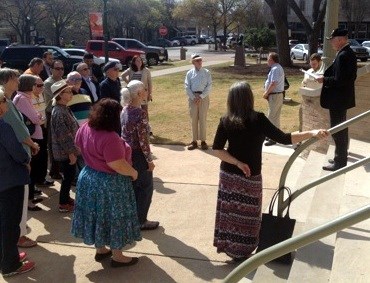 The questions violated all our freedoms by an obvious effort to create government that enforces a predetermined religion or political belief in Williamson County.  The applicants should have only been questioned about their experience and ability to perform the job for which they were being considered.

If any court decides you can be questioned about your religion and political beliefs, for government employment, then we need to rethink our standards of freedom.  I condemn the Williamson County Commissioners Court attack on these three citizens and our freedom.

I defended our nation and constitutional rights for twenty years in the U.S. Army.  My service included front line combat in Vietnam, and years along the Iron Curtain facing the communist Soviet Union during the Cold War.  I served as an enlisted soldier and as a commissioned officer.  My father landed on Normandy beach and fought NAZI oppression, all the way to Berlin, under the command of General George Patton during World War II.

Far too many loyal citizens have fought this kind of oppression by giving their lives and limbs since the beginning of this nation.  Some of those lives ended by my side.  We cannot desecrate their sacrifices or ignore our principles by tolerating the Commissioners Court oppression, arrogance, and disregard for our freedoms.

The behavior of the sitting Commissioners clearly shows a well coordinated and destructive plan to ignore performance, merit, and ability in favor of predetermined religious and political beliefs.  I have no doubt their prejudices are not limited to the questions they posed.  The behavior is discriminating and repulsive to our founding principles and diverse communities.  We cannot allow any government official to establish the precedent of violating a citizen's rights.

Williamson County citizen's have been saddled with the highest per capita debt in Texas and this case will cause our citizens to pay even more for their freedom.